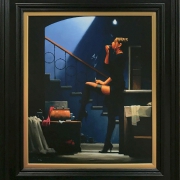 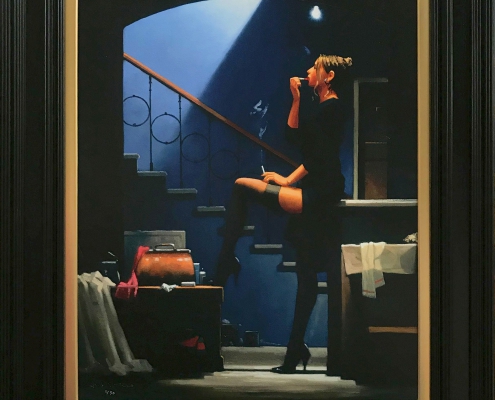 This Rare Silkscreen is an absolute must for a serious Collector.  Number 196 of 275.

History of “Dancer For Money”

First shown in the “Halfway to Paradise” Exhibition in 1996, “Dancer For Money” was purchased by Actor Jack Nicholson.  It was released as a Silkscreen Limited Edition with a 275 run in 2000. The run was immediately sold out and it is now only to be found (if at all) on the secondary market.  Other  Limited Editions were released at same time also with runs of 275.  They included “The Drifter”, “Winter Light and Lavender”, “Beautiful Losers 11” and “The Letter”.  Jack Nicholson kindly loaned his painting to the Kelvingrove  Museum for the Vettriano “Retrospective”Exhibition in 2013/4

“Dancer For Money”  was inspired like many of Vettriano’s artwork, by the Tina Turner song “Private Dancer.  He took other inspirations from songwriters, such as Leonard Cohen  and Johnny Cash.

In September 2018, another smaller format run  of this image was released, with only 59 Limited Editions and 4 Artist’s Proofs.  As one of the foremost Vettriano specialists in the U.K. Jack’s Gallery has one remaining Artist’s Proof No V/V and one Limited Edition of this run also.  In addition the Gallery stocks many more Vettriano Artist’s and Studio Proofs, and Limited Editions. We also stock a huge range of  Open Prints of his  Artwork.

Please come in and browse or feel free to phone us for further information.