Vettriano lovers have been awaiting this release for 12 years 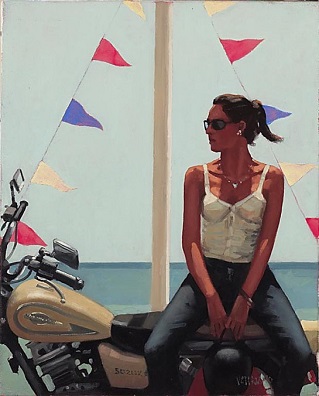 This beautiful painting was first shown at the at the Love Devotion and Surrender Exhibition in 2006.

The exhibition was the tenth and final exhibition by Vettriano at The Portland Gallery.

Of the twenty-four paintings that were featured, ALL were sold to private collectors prior to the opening, but six of the paintings had Limited Editions also available.

These included the “Her Secret Life”, “Devotion”, “On Parade”, “The Temptress” and “Long Time Gone”.  All  these Editions are now highly collectable.

Now finally “La Fille a la Moto” has been released as a Limited Edition of  175, with 20 Artist’s Proofs.  All are mounted, hand signed and numbered by Jack Vettriano, with a full Certificate of Authenticity.

“La Fille a la Moto” was painted in Nice

This truly stunning picture of a  vibrant and sexy young woman on a motorbike, is set against the backdrop of the Riviera. Her dark jeans and helmet contrast with her thinly strapped white T-shirt. Tanned and wearing dark sunglasses her  gold jewellery contrasts perfectly against her tanned skin.  The breeze is gently fluttering her hair and the bunting.  The powerful motorbike shows off her femininity,  and the whole image is framed against the vivid deep blue Mediterranean.  Although not painted in the 1960s the picture has a retro feel and gives a feeling of the carefree youthfulness and new found independence of a young woman riding a man’s bike.

Jack’s Gallery has acquired  2 Artist’s Proofs, including the highly collectable No 1 of 20, plus a Limited Edition of this wonderful picture.  Call us for more details.

If you do not want that we track your visit to our site you can disable tracking in your browser here:

The following cookies are also needed - You can choose if you want to allow them: