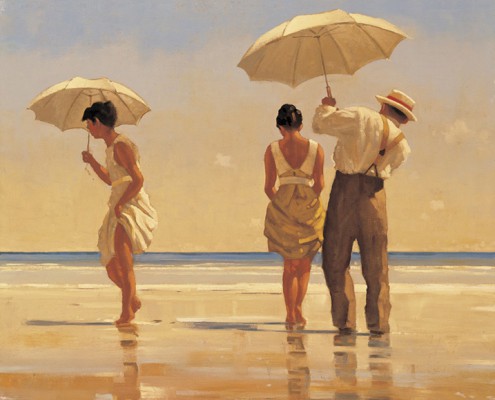 Inspiration for the Title

“Mad Dogs” title was inspired by the song “Mad Dogs and Englishmen” written and sung by Noel Coward.  It is said he composed it in his head, without paper, pen or piano whilst  driving from Hanoi to Saigon.  The quintessentially English Sir Noel, known for his wit and flamboyance, first performed the song in the Third Little Show at the Music Box Theatre in 1931.  “Mad Dogs” and thereafter it became his signature tune in his Cabaret Circuit.

The quirky title inspired another iconic writer and singer Joe Cocker to name his Live Album “Ballad of Mad Dogs and Englishmen”.  The Album was released in 1970 and performed by an unconventionally large band to mixed reviews.  One remarked that the bandmate and musical director Leon Russell drowned out Cocker’s creative presence, but on the whole, that was not a bad thing.  However, a decision was made to film the tour and it resulted in a theatrically-released concert of the same name.

Jack Vettriano painted his “Mad Dogs” in 1991 and it was featured at the Kelvingrove Exhibition in 2014. Although Vettriano was snubbed by national collections the original painting was sold by Sotheby’s in Scotland for £330,400.  His “Singing Butler” has been voted the third most popular picture in the U.K. today.

This nostalgically elegant  picture shows two young women paddling their feet in the shallows of the sandy beach.  The courteous gentleman holds an umbrella to protect his lady from the sun.  The golden colours of the sand, and the paler cream of the umbrellas contrast vividly against the bright blue of the sea.  The picture evokes freedom, exuberance and above all Sunshine.

Please visit us at Jack’s Gallery or phone us for further details of the rare and collectable Studio and Artist Proofs.  Bring in the Sunshine.